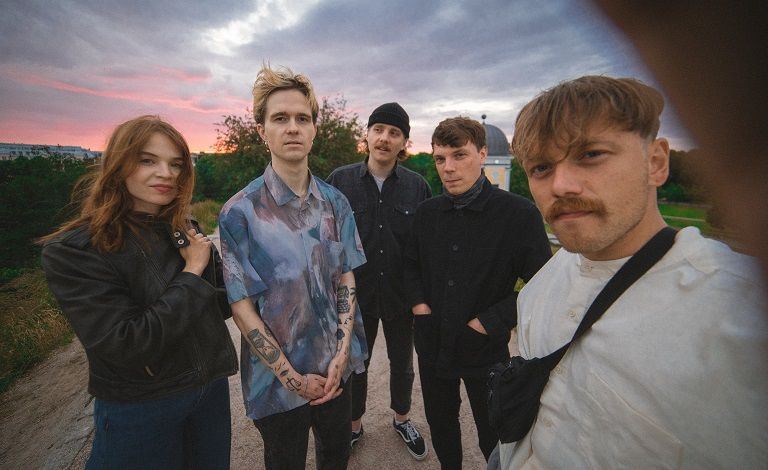 The Holy are a Finnish alternative rock band formed in Helsinki in 2014. Their highlyanticipated sophomore album Mono Freedom will be released 2nd October 2020.

The quintet has been shaking the ground of the Nordic music scene since the release of their debut EP More Escher And Random Notes in 2016. Mixes of post-punk, Bruce Springsteen and Peter Gabriel with Krautrock influences are often mentioned when speaking about The Holy’s well crafted sound and songwriting.

Hailing from one of the darkest countries in the world, The Holy are known for their Nordic melancholy, highly explosive live shows and for the unusual band formation that includes two drummers who keep the pulse high at all times. Lead singer Eetu Henrik Iivari’s tense and timeless voice and the guitar loaded wall of sound often makes you feel comfortably uncomfortable.

Starting out in the small venues of Helsinki, The Holy have travelled a long way performing over one hundred shows - including all the major Finnish festivals; Flow Festival, Ruisrock, Provinssirock, Ilosaarirock, as well as touring across Europe in Sweden, Germany, UK, the Netherlands, Switzerland, Luxembourg, and Austria. They have showcased at Midem Digital Edition 2020, Eurosonic 2019, Iceland Airwaves 2019, Reeperbahn Festival, Where Is The Music, JaJaJa London, Berlin & Vienna, and Finland’s own Lost In Music.

The German/French TV channel Arte filmed the band’s performance at Flow Festival 2019 in cooperation with Finland’s YLE, and Seattle based KEXP filmed their show at Iceland Airwaves, which was published on the station’s popular YouTube channel. In October, The Holy will make an appearance at the prestigious WDR Rockpalast Crossroads Festival, which will be broadcast later this year.

The Holy’s debut album Daughter gathered praise both in Europe and Finland, resulting in an EMMA-nomination (Finnish Grammy) for Critics’ Choice in 2019. The reviews praised the honest songwriting and lyrical themes of the album including topics such as the 1990s Finnish economic recession and its reflection on the youth of its time.

Sales closes at 30.10.2021 21:00.
Music, Indie, Rock, Domestic artists
If Covid-19 related Event or Restaurant restrictions are in place during the event, a Covid-19 certificate may be requested at the event. Please visit our T&C's for more information: https://www.tiketti.fi/en/info/deliveryterms
Suisto-klubi
Verkatehtaankuja 7, 13200, Hämeenlinna
X