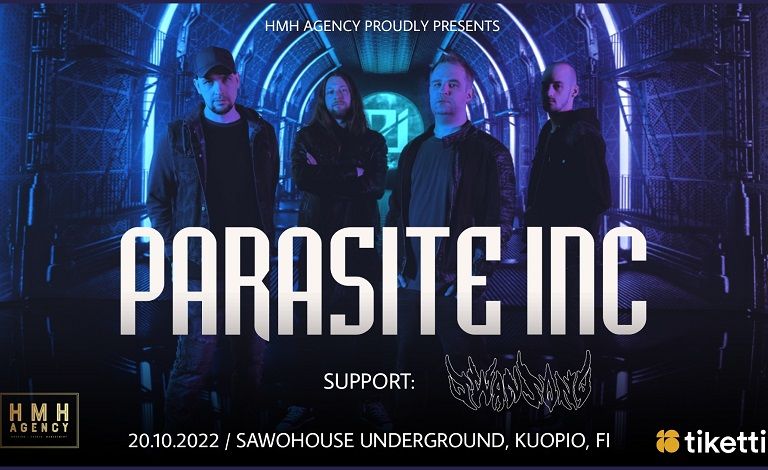 In 2022 AD, PARASITE INC. present themselves in a sound robe that is equally harder as it is softer, faster and slower at the same time – more modern and yet again more “80s” than ever before! Such musical contrasts are no novelty for PARASITE INC., though: After all, the Swabians have been surprising the world again and again with their somewhat different interpretation of the Melodic Death Metal genre since the inception of their career.

Since their formation in 2007, the four-piece from Aalen have been able to continuously expand their fanbase after an internationally extremely convincing demo, two studio albums, as well as a live record, which has been reflected both in front of the stage as well as in the responses to recent releases: As a result of captivating live performances domestically in Germany as well as broader Europe, combined with a conscious breaking of genre boundaries, the very second full-length output “Dead and Alive” climbed to #33 in the official German album charts in 2018!

Building on this successful foundation, ten songs were created during the pandemic in the band’s own studio under the title “Cyan Night Dreams”, which yet again showcase a consistent musical development towards an even more independent sound. The result is a varied album, which comes across fiercer and more aggressive than its predecessor, but at the same time brings the melodic facets of the band to the surface even more and consistently refines the band’s unique sound and trademark.

From songwriting, to production, to graphic design, the German melodeathers once again developed an overall concept that perfectly reflects the dark mood of the songs. The album was mixed and mastered by Aljoscha Sieg and Seb Monzel (known for their internationally renowned mastering work with i.g. Eskimo Callboy, and August Burns Red, to name but a few) at Pitchback Studios, where the last studio album as well as the live concert album had been refined. The album was supported by the Initiative Musik as part of the “Neustart-Kultur-Programm”.

Combining beautiful and brutal since 2020!

Swansong was founded in Kuopio, Finland in 2020. Founders of the band, former Up Yours- punk vocalist Jemiina and Verjnuarmu guitarist Topi Pitkänen, joined forces in 2019 and started to make music together.

Swansong is bringing something new to the metal scene combining melodic death, heavy and folk metal just to name a few.  The powerful melodies with kickass riffs give you the 80's and 90's wibes. Oldschool elements get a new twist with a female death growls and screams with clean male vocals. Step in to the Swansong world of empowering stories with midnight warriors, strong maidens and let the cold wind howl!

Players of the band are experienced musicians from such bands as Verjnuarmu, Tornado, Carnal Demise and Omniversum and the songs have been in the making from the year 2020.

Swansong is driven to continue on creating it's own world of awesome melodies, stories and visual elements which the listeners around the world have already given a great response.​