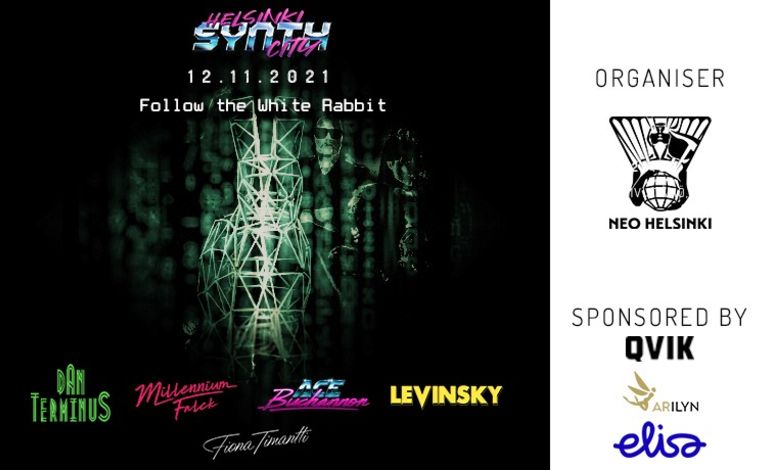 The Helsinki Synth City festival tour makes its long-awaited return on 12th November at Tiivistämö, Helsinki! The headliner of the event is one of the great cult names of synthwave scene, Dan Terminus, the French king of cyberpunk. Dan Terminus’ latest album “Last Call For All Passengers” was released in 2020 on the Finnish label Blood Music. The album treats the listener to a full frontal assault of intense cyberpunk influenced synthwave.

The other artists of the night are the local players Millennium Falck, Ace Buchannon and Levinsky.

The time traveller Millennium Falck arrives straight from the future of Helsinki and he’s here to deliver a powerful set in our present time. He can funk, he can synthwave and he can surely also deliver the darker side of Falck.

Ace Buchannon combines modern production with a warm retro sound to create lush and timeless synth escapades from hard-hitting cyberpunk anthems and city pop to dreamy saxophone melodies and everything in between.

DJ Fiona Timantti has been fascinating audiences from Helsinki to New York since 2007 with her stunning looks, enchanting style and most of all: the music. She started out as a Helsinki Burlesque DJ and has since been entertaining crowds in many different parties, even including the official afterparty of the Presidential Independence Day ball. Rest assured her set will make you dance and entertain you with banging synth and electro tunes at the event afterparty!

Get your tickets at Tiketti now and follow the White Rabbit to Tiivistämö!

Compulsory garderobe fee at the door 3 €.

Music, Electronic music, Foreign artists, Domestic artists
If Covid-19 related Event or Restaurant restrictions are in place during the event, a Covid-19 certificate may be requested at the event. Please visit our T&C's for more information: https://www.tiketti.fi/en/info/deliveryterms
Tiivistämö
Suvilahti, Helsinki
X