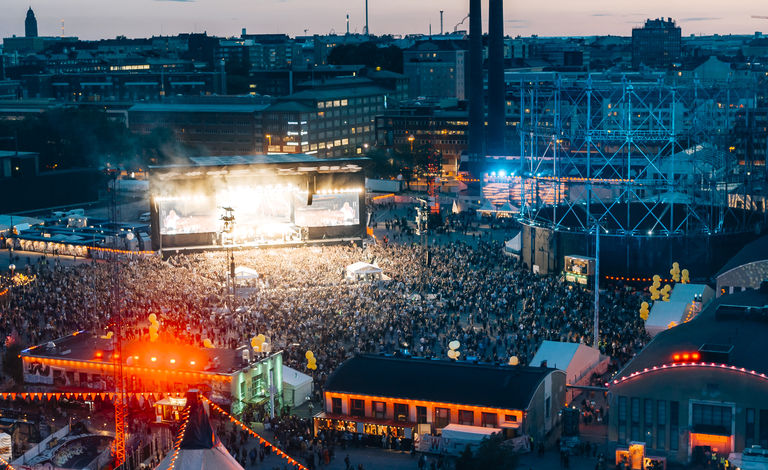 The next global superstar, Nigerian Burna Boy will perform at Flow Festival in August. The Helsinki-based festival will also host Danish pop sensation MØ, and many more. The number of international must-see acts at Flow Festival is on the rise as the festival gears up to host Jamie xx, Jarvis Cocker with his rock band JARV IS… and a heap of other artists at the enchanting urban venue. Flow Festival takes place in Helsinki on the 12th – 14th of August 2022, with over 150 performers.

Flow Festival’s colossal program reinforces as one of Africa’s biggest stars, Burna Boy, joins the festival program. With his fusion of dancehall, reggae, Afro-beat, and pop, Burna Boy is one of Nigeria’s most successful artists of all time. Burna Boy is a messenger of his signature Afro-fusion sound, who aims to build bridges between black people worldwide with his music and performances. Added to Flow’s lineup is also Danish singer-songwriter MØ. With her monumental 2014 debut album, No Mythologies To Follow, and a prominent feature on Major Lazer’s Lean On — one of the most successful singles of all time — MØ’s career launched into the stratosphere for good.

The festival welcomes London-based producer and beatmaker Jamie xx to Helsinki. Considered as one of the most respected electronic music producers in the world, Jamie xx helped change the sound of the late 2000s and beyond with his Mercury Prize-winning group The xx, and on his own. Another world-renowned act arriving at Flow is JARV IS…, a project launched by Britpop legend, former Pulp frontman Jarvis Cocker that released its debut album Beyond the Pale in 2020.

Additionally, Flow Festival will host one of the most appreciated artists of gangsta rap and alternative hip-hop Freddie Gibbs and an artist of a rare caliber, singer-songwriter Aldous Harding. Releasing her new album in March, Harding is widely considered one of this millennium's most significant folk artists. Heading over to Helsinki with their live set will also be Acid Arab. The Paris-based electronic music crew mixes traditional North African and Middle Eastern music with acid and techno to create new musical encounters.

All announced artists and the daily programme:

Flow Festival, the truly urban boutique city festival, has been organised in Helsinki annually since 2004. Flow Festival was born out of the founders' passion for culture. Flow has grown from a small club event to the trailblazing European music and arts festival it is today.

Flow Festival is a carefully curated, high-quality festival with an innovative and content-driven program that is an inspired mixture of popular culture and experimental arts. With a broad music and arts program, hand-picked food and restaurant services, thoughtfully designed and decorated festival area and extensive sustainability program, Flow has put a new benchmark on the European festival scene.

Ticket purchases limited to 6 per person.

Now you can redeem your open day tickets! Choose the ticket type you want and look more info here.

The Gold Area is an oasis for the international and domestic guests and partners of Flow Festival. It's also an ideal space for smaller company get-togethers and networking.

Ticket buyers' contact infos will be handed for the organizer for further informing.

Your existing tickets for either Flow Festival 2020 or 2021 will automatically be accepted for the 2022 festival without you having to make any additional arrangements. There is an opportunity to update your one-day or two-day ticket from one festival day to another via Tiketti's customer service. If you want to upgrade your ticket to another ticket type, it is possible by paying the difference. Upgrading to a 3-day ticket or Gold Area ticket is also possible. Tiketti will charge a service fee for changes. You will find more about the programme and the frequently asked question on Flow Festival’s website: www.flowfestival.com/en/flow-info/faq/

Save the Baltic Sea!

The mission of the John Nurminen Foundation is to save the Baltic Sea and its heritage to future generations. The foundation executes concrete measures to stop eutrophication and biodiversity loss. Join the important work by adding a donation on top of the ticket price.