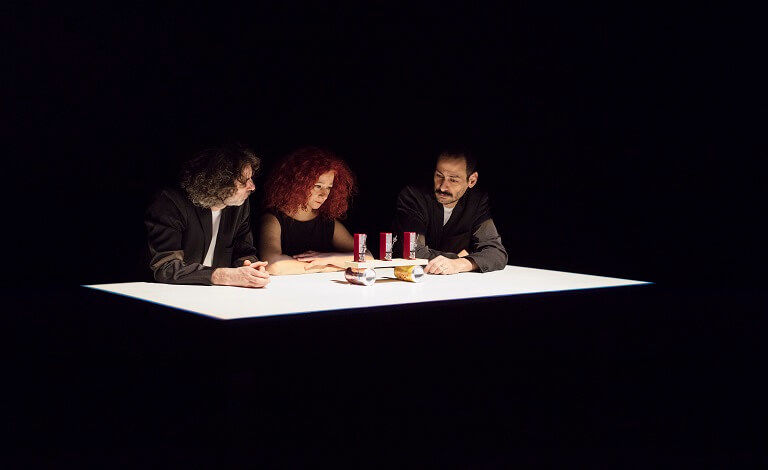 Performed in Arabic, subtitles in Finnish and English

Borborygmus, or fragments of thoughts and feelings about life, death and the digestive system. Apparently, it is about disillusion and failure; about three human beings, three artists, who have surrendered to the sad reality of today. But in fact, it is an attempt to grasp our failure and push it to its extreme, as an ultimate form of resistance. Fiercely, but without rancor, Lina Majdalanie, Mazen Kerbaj and Rabih Mroué perform a score about the world today, a black comedy, a requiem for the living.

Mazen Kerbaj is a comic artist, visual artist and musician. As a trumpet player, Kerbaj pushes the sonic boundaries of his instrument, forging a singular sound and innovative musical language.

Lina Majdalanie (formerly known as Lina Saneh) is an actress, director and playwright. In her works, Majdalanie explores the violent and mutual impact of political acts and speech on the body.

Rabih Mroué is a theatre director, actor, visual artist and playwright working at the interface of performance and visual arts. Mroué's productions are distinguished with a unique connection between aesthetic and political research and they frequently combine everyday real material with self-created fictive narration. His performance Riding on a Cloud was presented at Baltic Circle in 2016.

Strong light effects are used in the performance.

By and with: Lina Majdalanie, Mazen Kerbaj, Rabih Mroué

Commissioned by HAU Hebbel am Ufer, Walker Art Center (Minneapolis)
Co-production: Mousonturm (Frankfurt), Wiener Festwochen.
Supported within the framework of the Alliance of International Production Houses by
the Federal Government Commissioner for Culture and the Media and by Rosa
Luxemburg Stiftung - Beirut Office

Please arrive early. Latecomers will not be admitted.

Ticket buyers' contact infos will be handed to the organizer for further informing.