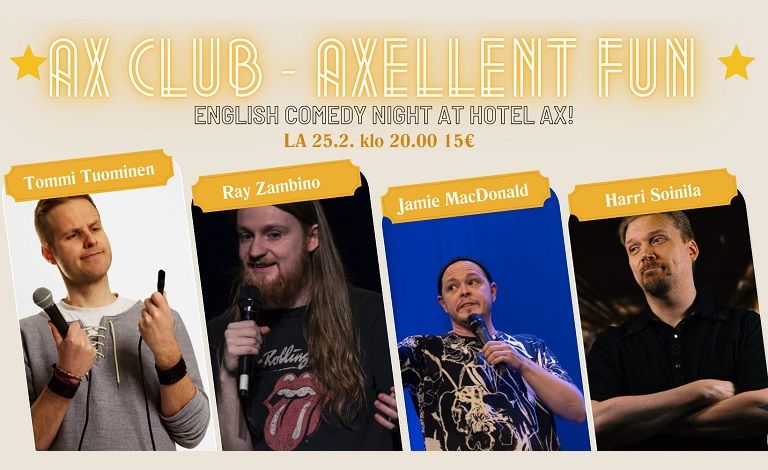 Jamie MacDonald is a Finnish-Canadian comedian and artist, known for hosting the Punch Up! Resistance & Glitter shows at the Finnish National Theatre as well as Comedy Idiot, a monthly English Comedy club in Kallio. He is also known as the face of The Feminist Comedy Nights, and as the co-host of the Radio Helsinki podcast How Bad Was That with Ali Jahangiri. His first solo show Gender Euphoria ran for sold out audiences, and we are very happy to have Jamie with us on this special night.

On stage Ray Zambino makes the impossible possible: He is Scottish, yet you can understand him. Ray’s comedy involves silly one liners, the cultural observations of a stranger in a strange land and the occasional absurd idea. Ray has previously written for MTV, Yle and performed on Nelonen Stand Up, he has worked internationally for the BBC and performed all over Finland, the UK and around Europe.

Tommi Tuominen is an award winning Finnish comedian who has a rapid-fire wit and a presence that never leaves the audience cold. Tommi has been doing Stand up since 2005 and written or performed in many Finnish TV-shows for years.

Harri Soinila is one of the most international comedians in Finland. He has performed at various international comedy festivals in London, Liverpool, Barcelona, Ljubljana and more. Harri also warmed up for Russell Peters on his European tour. Over all Soinila has performed in 20 countries on three continents and he represented Finland at Laugh Factory's Funniest Person in the World competition.

Choose the ticket option that suits you and come and enjoy a great Stand Up in English at the atmospheric AX Under!

The Show + Dinner ticket includes a three-course surprise dinner, from which you can choose a vegetable or meat option. Drinks are not included in the price.
Dinner is enjoyed before the evening's Show Time: 18.00-20.00
Our professional artisan chefs guarantee a high-quality and inspiring taste experience!
If you have food restrictions or allergies, please notify them by email to restaurant@hotelax.fi (put your name, date of restrictions and the name of the Club night in the email)

Show+dinner+accommodation package rate including the following:
• 3 course dinner at the hotel at 18.00
• Show at the hotel at 20.00
• Accommodation, breakfast and wifi
Booking can be modified or cancelled free of charge 48hrs before the arrival date.

The sale ends two days before the purchased evening.